About Us
RSS Mirror Hypnosis for Autism: Is it Beneficial?

Hypnosis for Autism: Is it Beneficial?

Ever since my autism diagnosis 25 years ago, doctors and therapists have been a regular part of my life. I’ve run the gamut of antidepressants and anti-anxiety drugs; I’ve seen countless therapists in my journey recovering from PTSD, social anxiety, and addiction. 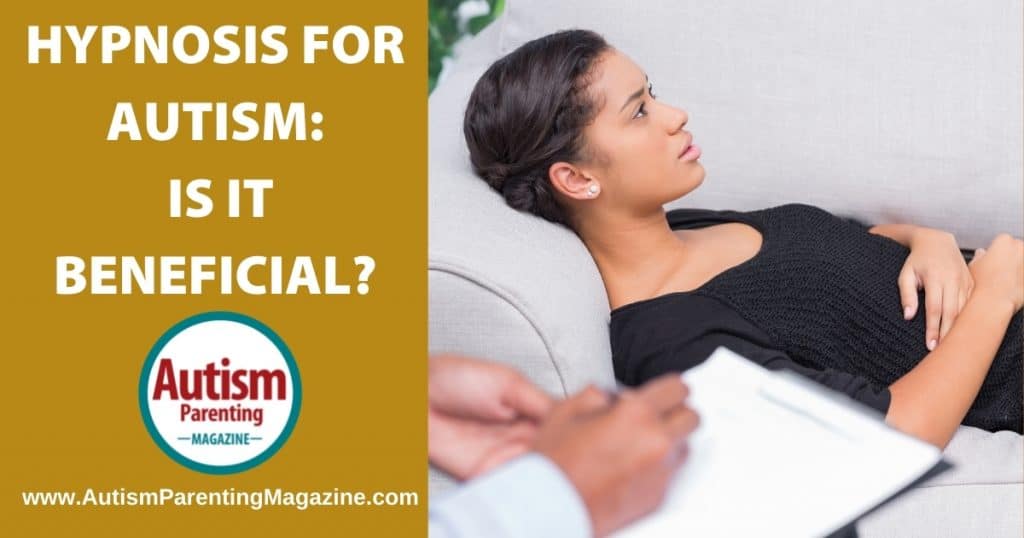 Despite keeping an open mind, when I was offered a course of hypnotherapy I didn’t take it lightly. I went straight to “Doctor Google” hoping to demystify the process.

If you’re on this page you probably want to know if this is the right kind of therapy for your child. You may have the same mental image that I had of the bizarrely dressed showman coaxing his audience to do bizarre things. Terrifying, right?

I can assure you, it’s nothing like the stuff you see on TV. The practice is perfectly safe, and a good hypnotherapist will be happy to address any worries and explain how it works. It’s important to let go of those preconceptions and think of this in the same way as any other treatment you may have tried.

Hypnosis has been widely used for decades to help people to overcome addictive behaviors, anxiety, and depression. These are all issues that people on the autistic spectrum are more prone to and there is increasing evidence to show that hypnotherapy is particularly useful for us.
Antidepressant drugs, including SSRIs and MAOIs, are commonly prescribed to children with ASD, but they have been found to be less effective than in non-autistic children (2021). This leaves us seeking non-pharmaceutical, alternative treatments in the hope they will be of more benefit.

How does hypnotherapy help with autism?

It’s important to realize that autism isn’t a disease to be cured; it is just a different way of thinking. I’m sure you’ll see that your child has many wonderful qualities that need to be celebrated and nurtured. Seeing a hypnotherapist won’t radically alter your child’s personality. It certainly won’t free them of their ASD, and it also won’t solve all of their problems overnight.
The goal is to equip the patient with the tools to overcome those negative feelings that are commonly experienced by autistic people, such as anxiety, depression, low self-esteem, behavioral issues, and phobias. This is where your hypnotherapist can help.

Good therapists will treat you as an individual—your kid is not just a set of symptoms! Adults and children on the autism spectrum are not all alike, and this is what makes hypnotherapy well suited for us. Janet Dowling, a professional hypnotherapy specialist recommended by the National Autistic Society, explains that therapy sessions are very much tailored to individual needs, which can vary from one week to the next.

Dowling tells Autism Parenting Magazine: “I find out what difficulties and challenges a person hopes to overcome, and if they want to be calmer, happier, more confident, etc. I ask them what they enjoy, what they’re good at, and who they like spending time with. By focusing on positives and existing strengths we can build on these.”

What happens during hypnosis for autism?

Don’t panic; your kid will NOT be in an hour-long trance! An important part of the therapy is to equip the client with better self-awareness and knowledge of how the brain is functioning. By learning behavioral techniques the person can practice at home, they could overcome difficulties that have held them back in the past.

Dowling’s sessions typically start with a conversation with the client, to figure out what they hope to benefit from at the clinic. They will go on to explore a range of breathing techniques, mental distraction, grounding, and other exercises. She then moves the client into guided hypnosis as this allows the mind to process what has been covered in the session.

“I always start by asking ‘What’s been good about your week?’ This engages the prefrontal cortex. Then we establish what they’d like to focus on. This can range from ways to not get cross, how to stop negative thinking, being able to try new things, or getting to sleep,” she explains.

The goal is to create a “positive doing picture”. Many people with autism have the ability to think in pictures; this is why hypnosis for autism can be an effective therapy. “I ask for a lot of detail—time, place, who with, how long, etc. to help them to build a really vivid picture in their imagination.”

Dowling shows her client a physical model of the brain and uses metaphors to help them to understand why they are feeling a particular way. She explains the “fight or flight” response by referring to the rational prefrontal cortex as “The Boss” and the primitive amygdala as “The Guard”.

“We talk about times when their Guard is in charge when it doesn’t need to be. We look at moments when their Boss has responded. I explain that future sessions focus on training their Boss brain to be more in charge, by practicing ways to calm the Guard down,” she adds.

Neurotypical adults also experience the “fight or flight” response at times of worry, but it is triggered much more readily in people with autism. Imagine that you have to give a presentation and you’re not prepared—your heart starts racing, your mind goes blank and your stomach is in knots.

For autistic children and adults, this response may be triggered at a much lower level. It may be when their favorite food isn’t available in the grocery store, or when the school day is disrupted by a fire alarm. It can seem like a trivial matter to a neurotypical person but the anxious brain registers it as a threat.

Woods (2017) explains how slow diaphragmatic breathing can calm the amygdala enough so that the prefrontal cortex can regain control. Training the mind with these simple techniques could lead to better functioning in social situations and other places that have provoked anxiety in the past.

Sugarman (2013) developed a treatment method that uses computerized biofeedback and clinical hypnosis to modify behavior. He states that turning down the fight or flight response could help patients with ASD to be “more socially engaging, decrease some of the need for cognitive rigidity and repetitive behaviors and, more importantly, allow them to feel better”.


What happens during the ‘hypnosis’ part of the session?

Kohen (2013b) says the goal of hypnosis is for the patient to enter a deeply relaxed state where the mind is most receptive to change, in order to change the pattern of thought. The brain is more suggestible when in a relaxed state.

Dowling explains: “We all go into a hypnotic state many times a day – it’s when we daydream. In therapy, we ensure that the trance is focusing on positives, rather than that negative loop clients have found themselves in.

“In the lovely, positive hypnotic state we’re able to allow our mind to process what we’ve been talking about and further explore other possibilities.”

What if my child can’t relax?

Few things fill me with as much dread as being told to sit still. At school, I was constantly told to stop fidgeting, and pay attention! Even as an adult, the more I focus on that demand for stillness, the tenser I get.

The bottom line is that it’s really, really hard for many people with ASD to relax on command. However, there is a HUGE positive for us…

Many autistic kids have this awesome ability to get lost in their special interests. Without even realizing it, we find ourselves totally relaxed. This is why it’s so important to let them do what they enjoy, and whatever gets them into a state of relaxation.

“The child is free to fiddle with something, or doodle, or even close their eyes if it suits them,” Dowling says. “Hypnotherapy is of such benefit for autistic people as it focuses on their strengths.”

What if my child can’t be hypnotized?

One therapist has written that a quarter of his clients lacked the ability to be hypnotized (Spiegel, 2012). For some, it will only work alongside another kind of therapy, such as cognitive behavior therapy. This applies to the general population, not specifically patients with ASD, but it does require a bit of imagination and commitment for the training methods to sink in.

I remember as a kid I was fiercely strong-willed; if I was asked to do something I didn’t like, nothing on earth could make me! Like any form of behavioral therapy, it is more effective if the client is committed to change. Therapists tend to notice the biggest improvements when the person really wants it to work.

Make sure your youngster feels involved in the decisions at every step of the way and don’t dismiss their concerns. Woods (2017) stresses it’s really vital that the child being hypnotized is completely on board. If they think their parents are forcing it on them, you may have a struggle on your hands.

Is there anyone that should not be hypnotized?

Hypnotherapy is not advisable for people with psychosis. If your youngster is under the care of a psychiatrist then you must inform them before seeking hypnotherapy so that they can make sure it is safe and appropriate.

Hypnotherapy is generally a safe and effective treatment, but it is important that it is done by a qualified hypnotherapist. Make sure that your therapist is professionally trained and registered with a professional body such as the International Certification Board of Clinical Hypnotherapists (ICBCH).

As with any therapeutic treatment, patients need to be open to change for it to be completely effective. If the person isn’t on board it will be less helpful in treating anxiety and mental wellbeing and you may not see the best results.

A hypnotist can not control your child’s mind or make them do things against their will. It can be used in conjunction with other treatments, such as cognitive behavior therapy or along with medication.

I hope this article has helped to debunk some of the myths and will leave you with a clearer idea of whether hypnosis for autism is right for you.

Autism Parenting Magazine aims to deliver informed resources and guidance, but information cannot be guaranteed by the publication or its writers. Our content is never intended to be a substitute for professional medical advice, diagnosis, or treatment. Always seek the advice of a physician with any questions you may have and never disregard medical advice or delay seeking it because of something you have read on this website.

The post Hypnosis for Autism: Is it Beneficial? appeared first on Autism Parenting Magazine.

Get a FREE issue of Autism Parenting Magazine at https://www.autismparentingmagazine.com/freegift/