About Us
RSS Mirror Understanding High Functioning Autism and Anger

Many individuals with autism spectrum disorder face challenges that can lead to frustration and anger, but is there a link between high functioning autism and anger or aggression? If so, how can parents help teach their child to regulate those angry emotions and manage them in daily life? 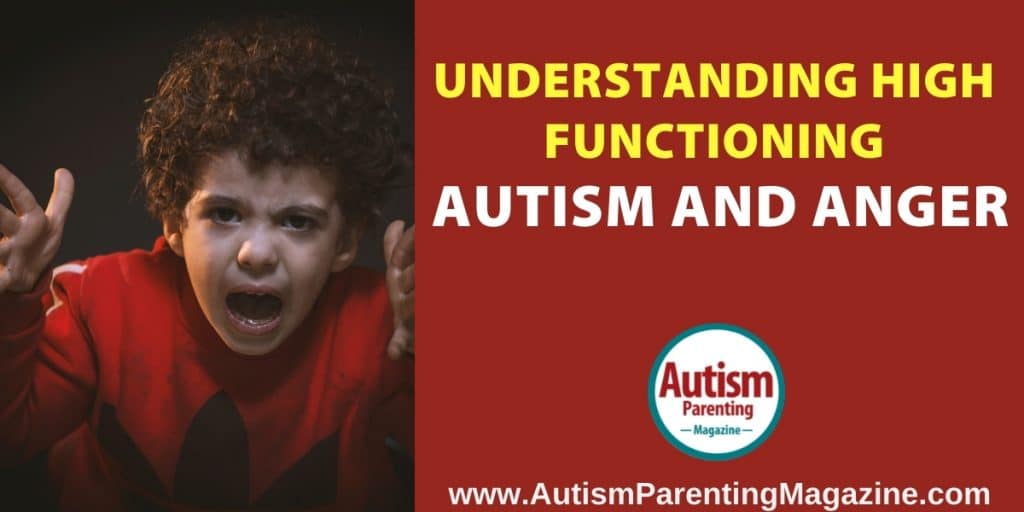 What is high functioning autism?

High functioning autism (HFA) has a lot of the same characteristics as asperger’s, although HFA isn’t a diagnosis or a medical terminology. People who are on the spectrum and are able to handle daily skills such as eating and dressing, while also being able to read, write, and speak are generally considered to be higher functioning. Once the American Psychiatric Association combined all of the disorders relating to autism under one umbrella heading called autism spectrum disorder, or ASD, the term asperger’s was no longer used.

Many people with ASD experience social struggles such as challenges with being able to converse back and forth with others, to join in on a conversation, to understand others’ viewpoints or emotions, and/or express their own emotions, and this leads to being on the outskirts of social gatherings, as well as challenges being accepted by other groups and having friendships where the other person sees them as a friend, as well.

This can lead to social anxiety and, in some cases, social phobia caused by the perception that certain social stimuli may cause a threat. One example of this was indicated in a study when individuals with autism spectrum disorder (ASD) were shown faces devoid of any display of emotion, and they determined the faces as exhibiting negative emotion. This perception could lead to feelings of social judgement or rejection.

In a 2012 study by Samson, Huber, and Gross, it was determined that people with higher functioning autism have higher feelings of nervousness and emotional upset than individuals who are not on the spectrum. A lot of these feelings are brought on by frustration due to social difficulties or communication struggles; school, work or family expectations; sensory overstimulation; or even difficulties with processing information. Many people with higher functioning autism have issues or problems understanding other people’s perspectives or why others behave as they do.

Another study looked at the connection between social anxiety, its connection with rumination (the act of continuously thinking about a negative situation) and possible anger or aggression in the general population and how much ASD would affect this. A group of 948 students who were mostly female, in their freshman, sophomore or junior year of college, and identifying from a variety of races and ethnicities were given a variety of measures. These included a Social Interaction Anxiety Scale to measure social interactions in different situations; an Anger Rumination Scale to measure how much they tend to ruminate on angry moods or feelings; and A Buss and Perry Aggression Questionnaire with questions measuring physical and verbal aggression, as well as anger and hostility. Finally, an AQ with items to measure any characteristics common to ASD.

The result of the study showed that people who are socially anxious while also showing cognitive inflexibility more often will show more aggression. This is because the anger rumination tends to wear down a person’s ability to control and prevent the person from behaving in an undesirable way socially, therefore leading to more aggressive behavior. This was across the board, whether or not the subject had characteristics of ASD. However, when including ASD characteristics, it was shown that these characteristics played a role in increasing anger rumination’s effect on aggression.

One study looked at 25 adolescents with ASD who did not have any intellectual disability and who were verbal alongside a control group of 24 adolescents without ASD to determine if there were an association between anger rumination and a variety of symptoms and aggression. Five different measures were used which included the Anger Rumination Scale with 19 questions on which the adolescents would answer in regard to thinking about, remembering, and solving problems in relation to anger feelings.

The SRS is a questionnaire where parents described or rated their child’s ASD symptoms for severity. Another questionnaire called the Mood and Feelings Questionnaire was used, as well as the Early Adolescent Temperament Questionnaire, which included an aggression scale. Finally, the Youth Self-Report, a form to measure a variety of items including anxiety, depression, and aggression, was also used. The conclusion was that adolescents with ASD showed more anger rumination than the non-ASD subjects.

In 2007 at the University of Wisconsin, Paul T. Shattuck, PhD, Marsha Mailick Seltzer, PhD, and colleagues studied a group of 241 individuals aged 10-52 and described as having autism symptoms and maladaptive behaviors. They watched the group for about five years, measuring their symptoms with standardized tests. While a small number got worse, and a moderate number remained the same, the majority of the group showed improvement with their symptoms and behaviors becoming less severe.

Dr. Rebecca Charlton, a Senior Lecturer in Psychology at Goldsmiths, University of London, conducted a study with her colleagues on 100 adult participants who had recently received a diagnosis by a specialist center in the UK for autism spectrum disorder. These individuals were compared to a group of 46 adults who had gone to the center but were not diagnosed as having ASD. The results of the study showed a correlation between a person’s age and whether or not they had difficulty in areas of communicating, socializing, and using their imaginations.

Don't miss out on our special offer.
Click here to find out more

The participants’ were scored after answering questions on the Autism-Spectrum Quotient Test or AQ. This tool, which was created and utilized by Simon Barron-Cohen and his colleagues in a study called The Autism Spectrum Quotient (AQ): Evidence from Asperger syndrome/high-functioning autism, males and females, scientists and mathematicians, was published at the Cambridge Autism Research Centre in 2001. Its purpose was for individuals to self-examine their autism traits based on their personal feelings and opinions through a questionnaire that would measure the degree to which the autism-spectrum traits were expressed.

In Dr. Charleston’s study, it was found that, for every 10 years of age, the scores from the AQ showed an increase by 2.19 points for communicating, socializing, and using their imaginations, but only in the group diagnosed with ASD. The ASD group also had an increase of 10.4 points for every 10 years in the area of systemizing. Systemizing is trying to figure out the rules to a system and then predicting how that system will behave.

Less than 50% of both groups had full-time jobs or were students, which they determined is similar to the entire ASD population, and both groups showed high rates of anxiety and depression, with one-third of the ASD group exhibiting these.

Dr. Charlton did question whether the systemization worsened with age or is this something that happens to most people, in general, as they age. She also pondered the idea that, because people with ASD begin to gain more insight and awareness of their traits as they get older, they may rate themselves more critically on the self-rating questionnaire. She also questioned whether young adults who are showing mild symptoms and/or their parents might look for a diagnosis to gain support for those symptoms, while an older person with mild symptoms might not. These factors could possibly also account for this increase in symptoms that are more severe.

Ways to manage anger in children with high functioning autism

One study looked at children with ASD who did not have any intellectual disability in relation to the Collaborative and Proactive Solutions (CPS). CPS, formerly Collaborative Problem Solving, is used to help children with oppositional defiance disorder (ODD) and attention-deficit/hyperactivity disorder (ADHD) with their challenging behaviors.

Parents and children work together to change how they view and solve certain problems by changing the mindset from what a child “won’t” do to what they “can’t” do. When a parent sees that certain environmental demands don’t coincide with their child’s delayed skills, they learn to identify which skills are delayed and decide which problems are most important on which to focus. Then parents learn how to discuss this with their child, and both parent and child learn how to understand the other person’s issues while coming up with a solution. This allows both parties to discuss what the child would do if they did have the resources to be able to follow through on the task.

A controlled trial showed that this treatment is very helpful for children with ODD, ages 7 to 14, if they participated in a given number of follow-up sessions. The trial did not focus on children with autism spectrum disorder, even though the skills that are focused on in CPS are, according to the American Psychiatric Association (APA), the same ones that children with ASD are deficient in and could cause anger or challenging behavior.

Unfortunately, current treatments do not focus on the differences between a child’s delayed skills and the demands of their environment. Sometimes a person may be given medication to reduce the irritability, which is believed to cause the challenging behaviors, but these medications come with side effects, risks and/or serious health problems.

Most common treatments include applied behavioral analysis, behavioral strategies, or parent training, but studies are being done to determine if CPS might work better for the older children since they are able to work together with their parents to understand these delayed skills, while setting and adjusting goals.

What can parents do to help children with anger issues?

Parents who want to lower the frustration for their child with autism can help in a few ways.

First, they can help the child identify their emotions by giving them concrete examples of what these emotions mean. A parent can explain that when they get angry they feel like shouting and stomping their feet, but when they are relaxed, they feel peaceful and calm. Then help the child use a rating scale from one to five, where one could be calm and five could be angry. If a child loves animals, they could use a sleeping kitten for calm, up to a roaring lion for angry.

Parents can also provide structure by telling their child ahead of time what is planned for the day. Explaining what the child should expect or what will happen next is helpful.

When planning ahead, a parent should also leave time and room for the child to do something that helps them unwind and regroup. Giving the child a safe place where they can take a break from what is happening so they can calm down is important.

If the child is experiencing anger, a parent can help by providing a way to alleviate that anger such as punching a pillow or running in the backyard.

Finally, if a child is experiencing anger, the parent should find out if someone is bullying them. A parent may need to explain what this means since the child may not understand that it is happening.

All children experience anger and often are not sure how to handle the strong emotion. A child with autism spectrum disorder faces many challenges which lead to frustrations each day, and with those frustrations, anger can ensue. People with high functioning autism often are aware of their challenges and social deficiencies, sometimes causing repetitive thoughts about this, leading to anger and possible aggression. Knowing how to deal with the anger and help your child find the tools to manage this will bring a sense of harmony and relief.

Autism Parenting Magazine aims to deliver informed resources and guidance, but information cannot be guaranteed by the publication or its writers. Our content is never intended to be a substitute for professional medical advice, diagnosis, or treatment. Always seek the advice of a physician with any questions you may have and never disregard medical advice or delay seeking it because of something you have read on this website.

Get a FREE issue of Autism Parenting Magazine at https://www.autismparentingmagazine.com/freegift/